This morning i drove the 50 odd km to Laragh, a lovely little village in Wicklow near the famous lakes and old monasteries of Glendalough.  A place i have visited often with family and friends and passed through a couple of years back when i walked the Wicklow Way.

We got there early, i nearly always do – in my genes i think.  But even if i didn’t have  to arrive early, i would still make the conscious decision to do so as its great to be able to relax into the event, watch everybody else arriving and soak up the atmosphere.  Today, being early, we had the added bonus of time for a stroll around Glendalough before the race.

The #laraghtrailrun is organised by the national school in Laragh to raise funds for their Autistic Unit and for the general running of the school.  If they run the school as well as they run the race it must be an awesome place.  An awesome place in an awesome location, just off the Wicklow Way – regular readers of my blog will know that the Wicklow Way was my first distance walk

I hope to do many more.

But back to running.

We had a choice of two distances, a 12k or a 6k.  When i first ran the race, two years ago, i ran the 6k.  This year being optimistic and thinking i was going to be soooooooo  fit by early March, i signed up for the 12k.  Three spinning classes into February, my chosen route to fitness this year, i got sick and then got sicker and now haven’t ran for about three weeks.  So the 12k was a bit doubtful, especially since about 50% of it was uphill.  I tried to convince myself that i could do it, that my chest infection had departed leaving a fit me behind.  But i had my doubts.

We collected our numbers, the 12k’s were yellow, the 6 k’s white – i took my yellow bib and wandered around warming up.  It was a beautiful sunny morning, an extremely rare event in Ireland this winter where the meteorological emphasis has been on dull, dark, wet and cold – miserable in summary.  Off we set, the 12k’s starting 15 minutes before the 6k’s. 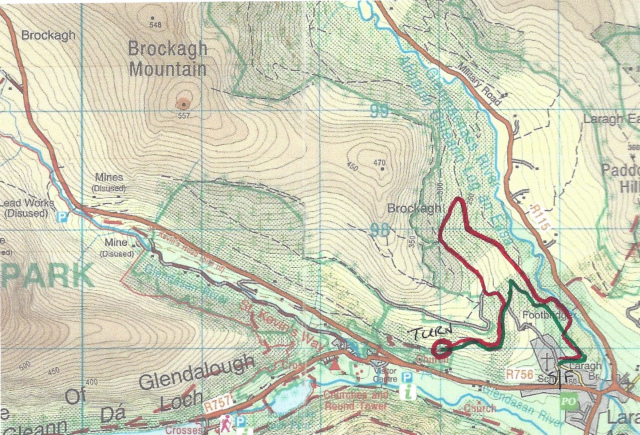 Reality didn’t take too long to catch up with me – an early starter today too it appears.  To misquote a famous boxer, a man can have all kinds of plans until he starts running up hill.  Running uphill is like a short-cut to reality – there is no hiding out there.  If your lungs, your heart, your legs or your determination isn’t up to it, then you find out pretty quickly.  Running on the flat, or running down hill – that glorious side effect of struggling up hill – doesn’t have the same attention seeking disfunction.  You can run on the flat even if you are not 100%.  Running downhill – makes you feel good even if you are suffering a bit.

And so it was with me today, my chest was gently reminding me that all was not well.

So i stretched my legs, kept my head up, admired the view and kept on going until i got to that point where the runs diverged.  I hesitated, torn between not giving up and not causing a nuisance of myself if i couldn’t make the 12k.  For once in my life, i took the wiser, more cautious choice and turned back – 6k it was going to be.  The added advantage, and temptation too as i was very aware, was that it was all downhill from there back to the school.  So i took off – determined to squeeze the last atoms of enjoyment from this wonderful run.

Of course, i had to make sure the organizers knew that i, yellow bibbed as i was, did not represent some sort of superhero 12k runner but rather a reluctant 6k finisher.  No surprise, i encountered a wall of sympathy and good wishes – there is definitely something in the air out there.

And so it was time for tea and cake, chat and laughter and a feeling that while my body hadn’t completed the 12k, my ego had had a very good run out indeed.